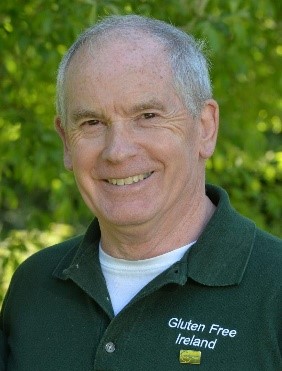 Derek with wife Tina and son Mike, run Gluten Free Ireland (www.glutenfreeireland.com) which they established when Tina was diagnosed with coeliac disease fourteen years ago. Supported by social media and an occasional newsletter, the website provides a platform for gluten free food producers to market products directly to the coeliac and gluten sensitive communities across the island of Ireland. Derek has been on the ‘Irish Free From Foods’ judging panel since it began four years ago and has taken part in a number of safefood events highlighting best practice food allergen management.

As a member of the safefood Knowledge Network, Derek recently availed of the safefood Food Safety Skills Fund when he attended a mock trial for a food allergen prosecution. This innovative event was organised by Tom Walker of the Southampton law firm, Blake Morgan and Caroline Bejamin of Food Allergy Aware.

In the report below, Derek tells us about his experience.

To eat or not to eat! That’s the question in every allergy or coeliac sufferers mind when looking to eat outside the home environment. I traveled over to Southampton t o attend the “Mock Trial” of a fictitious restaurant owner who had pleaded guilty to providing food containing allergens to an allergic customer despite receiving a request from the customer to avoid those allergens

The object of the exercise was to help food business owners realise that mistakes in allergen management can be financially expensive for a business and potentially fatal for an allergy sufferer.

The exercise also showed how a sentence would be arrived at using the Court Sentencing Guidelines currently in place in England and, to a lesser extent, in Northern Ireland.

I attended to see if the exercise would be of benefit to food businesses on the island of Ireland and to see if it could be replicated here.

The event opened with presentations from some leading experts in the field of allergen control. Dr Hazel Gowland gave a count of her personal experiences and the harsh facts of the increase in the prevalence of food allergies and the consequences for human health.  Lynne Regent, CEO of Anaphylaxis Campaign UK, outlined examples of high profile cases regarding allergen control deficiencies along the food supply chain.

The event was a mock trial where practising barristers and solicitors played out a fictional scenario. The jury, which consisted of the audience, heard of the company’s policies and procedures around food allergens and how the event unfolded around the negligence of the staff in identifying allergens present in food. The jury heard of the chef adding cashews to a sauce to add more flavour and not identifying the allergen “nuts”, and who also served pasta that had already been recalled as it had been labelled gluten free by the manufacturer but still contained “wheat flour”.

Novel – I’ve never heard of it being done before for a food offence and certainly not on the island of Ireland.

Timely – Following some recent high-profile allergy cases, every food business should have been very interested.

Entertaining – The “legal eagles” who acted as the prosecution, defence, judge and court officials did a remarkable job keeping the narrative going in a totally believable way despite this being a fictitious case!

Educational – It really was an education to hear the various sentencing arguments put forward as the parties tried to decide on a suitable sentence for the defendant, bearing in mind the fact that he had pleaded guilty to the offences. It was interesting to see how the current Sentencing Guidelines in England come into play in such a case.

Well organised – the location at Blake Morgan’s office was perfect with plenty of space for everyone and the refreshments (including Free From) were well received. A big thank you must go to the organisers, the speakers on the day and the sponsors (without whom some events would just not happen) and, of course, the staff at Blake Morgan.

Conclusions - Perhaps an event similar to this mock trial would help focus minds on the real consequences of mistakes in allergen management in a broad range of food businesses, both manufacturing and food service.

Finally, my thanks to the safefood Food Safety Skills Fund for funding my trip to this very useful event.