The sound and smell of meat cooking on the barbecue is one of the great signifiers of summertime. With coronavirus restrictions easing and people once again able to congregate in parks and gardens, 2021 has all the makings of a bumper barbecue year. This is good news for beef farmers, suppliers and retailers but it’s also a time for food safety vigilance. While managing potential health risks linked to food fraud and antibiotic resistance are an ongoing priority in the upstream beef supply chain, further downstream it is undercooked meats – both cooked at home and served in restaurants and other venues – that continue to focus the attention of public health authorities amid a trend for eating pink burgers.

Back in 2016, an outbreak of shiga toxin-producing Escherichia coli (STEC), also known as verocytotoxigenic E. coli (VTEC), was linked to a restaurant in Ireland serving undercooked beef burgers. STEC is a particularly harmful type of E. coli that can cause kidney failure with children under five years of age and the elderly particularly vulnerable. There are different types of STEC that may cause illness: STEC O157 currently accounts for most cases but non-O157 STEC’s are also capable of causing severe disease.

Eating habits change, of course, and the 2017 data remains the most recent for Ireland, but research published in March this year from the UK’s Food Standards Agency (FSA) suggests consumers are still prepared to accept the risk of undercooking red meat in return for a perceived better taste experience. When 9,000 adults in England, Wales, and Northern Ireland were asked to indicate how often they eat different meats when they are pink or have pink juices, the majority reported that they never eat chicken or turkey (93%) or duck (67%) when it is pink or has pink juices; however, 64% reported eating red meat at least occasionally when it is pink compared with those who never do so (36%).

Back in 2018, concerns over undercooked burgers were sufficiently serious that the Food Safety Authority of Ireland (FSAI) deemed it necessary to publicly remind caterers and restaurants of the dangers of not cooking minced beef burgers thoroughly to remove harmful bacteria. It noted the potential for STEC contamination of raw minced beef and urged chefs and caterers to ensure that minced beef burgers are cooked thoroughly before serving. It also advised that waiting staff should not ask customers how they want their minced beef burgers cooked. Although customers may request undercooked or rare minced meat burgers, the FSAI noted that this does not exempt a food business from its duty of selling safe food nor protect it from potential prosecution. “Given the serious health risks associated with consuming undercooked minced beef burgers, this advice should not be taken lightly,” said Dr Pamela Byrne, CEO of the FSAI.

Beef burgers and other beef products are considered to present a ‘high risk’ because the raw materials may be contaminated with harmful bacteria such as STEC or Salmonella spp. While whole meat cuts have a low likelihood of problematic bacterial loads anywhere other than on their surface, beef burgers are made from reformed meat which undergoes a process of communition whereby various cuts such as the flank and fore quarter and/or beef trim are minced or chopped into relatively small pieces and then reformed into a meat patty. As a result, the potentially contaminated surfaces are often relocated to the centre, the point which usually receives minimum heat treatment during cooking.

In the case of beef burgers, there is a particular food safety risk of pathogenic bacteria being present within the internal structures of the product, which does not exist for whole cuts of fresh meat where surface cooking will invariably kill them off.

Burgers needn’t be a risky proposition: proper cooking to the thickest part of the burger will still ensure destruction of the pathogenic bacteria, however the trend in certain catering establishments to reduce the temperatures applied to achieve a better flavour and texture in the meat increases the risk of contamination.

Research carried out in 2014 by the UK’s Animal and Plant health Agency found that consumption of rare burgers results in the highest number of human illness per 100,000 servings: an average of 19 compared to 11.3 for medium and 8 for well done. More specifically, on average, there is a 41.25% and 137.5% increase in the mean likelihood of infection for medium and rare burgers respectively, compared to a well-done burger.

In order to reduce the risk of contamination and subsequent illness, the FSAI’s scientific committee produced a 2018 report into the most appropriate z-value to be used in calculating ‘equivalent cooks’ for beef burgers in food business establishments. (The z-value is defined as the number of degrees by which the temperature has to change to achieve a tenfold change in the d-value with the d-value being the time required in a given medium, at a given temperature, for a tenfold reduction in the number of organisms).

Data for zoonoses in Ireland for 2018 (the latest available) shows that contamination of beef is still relatively uncommon: no samples of fresh bovine meat, bovine meat products and minced meat tested positive for contamination with VTEC in routine or suspect testing, albeit the sample sizes in each case were small. However, for meat preparation (as defined under Regulation (EC) 853/2004) the positive rate from suspect samples was 9.7%.

Regarding other common pathogens, no cases of Salmonella were detected in any forms of bovine meat sampled from catering, retail and processing during the same year, while 2.1% of routine samples for Listeria monocytogenes  in beef tested positive.

Food-borne bacteria is not the only public health risk from the production of beef. Recent research published in the journal Food Control (Robson et al, 2021) identified 24 types of food fraud in beef supply chains by reviewing databases and surveying stakeholders. Many of the crimes relating to the beef supply chain had no direct risk to public health including those concerning country of origin, organic fraud, product extension through fat and falsified religious claims. However, a number of crimes were identified as being of concern. These include the use of unapproved food additives, in particular colorants, which may be used to conceal crimes such as expired products; the use of forbidden preservatives such as formaldehyde and sodium formaldehyde sulfoxylate which are considered or suspected to be carcinogens; and the consumption of meat products past their expiry date which can dramatically increase the chance of food poisoning.

“Where beef crimes, or indeed any other form of criminal activity in supply chains, poses a public health risk these should always be prioritised over any other,” says Professor Chris Elliott, director of the Institute for Global Food Security at Queen’s University Belfast and a co-author of the research. Professor Elliott explains that through their ‘food fraud risk register’ the researchers established a scoring system which means such risks will always be flagged as ‘high priority’ “so even if the likelihood of such events happening is small they get the level of attention they warrant”.

One such issue is the use of illegal veterinary drugs and growth promoters which, particularly in the form of antibiotics, have two notable human health impacts. One concern is antibiotic residues in food-producing animals linked to allergic reactions. Antibiotics, such as penicillins, have been shown to evoke allergic reactions even though small amounts of them are ingested.

The second is the development of antibiotic resistance, which is one of the biggest threats to global health today. The oft-cited 2016 O’Neill review on antibiotic resistance, commissioned by the UK Prime Minister, concluded that, based on scenarios of rising drug resistance for six pathogens to 2050, the burden of deaths from AMR could total 10 million lives each year by 2050, at a cumulative cost to global economic output of $100 trillion.

In 2017, Ireland published a national action plan on antimicrobial resistance (iNAP) for the period 2017-2020. The plan set out a range of strategic objectives with targeted interventions and activities to address antimicrobial resistance. As part of the objectives, the Department of Agriculture, Food and the Marine (DAFM) carried out education and awareness training on antimicrobial resistance and disease prevention through a knowledge-transfer programme to participants from the farming sector. An animal sector implementation committee involving key stakeholders from industry was established to oversee the actions detailed in iNAP. In meeting minutes published in September 2020, the committee noted of the 54 projects in the iNAP Animal Health Implementation Plan, 26 are now completed, 27 are ongoing, with one yet to begin.

Beef supply chain actors, meanwhile, have taken their own action by launching a food industry initiative on antibiotics (FIIA). The initiative brings together retailers, manufacturers, processors and food service companies – including major beef sector players – in order to promote and support responsible antimicrobial use and action on antimicrobial resistance. Members including ABP, Dunbia, Cranswick, Greencore, Moy Park, Sainsbury’s and Tesco have pledged to stop routine prophylactic use of antibiotics and to ensure that highest priority critically important antibiotics, as defined by the European Medicines Agency (EMA), are only used as a last resort, when needed to safeguard animal welfare and no alternative treatment option is available.

Trends in antibiotic use are moving in a positive direction. In 2018, the EMA published research detailing sales of veterinary antimicrobial agents in 31 European countries. For the 25 countries which provided sales data for all years between 2011 and 2018, an overall decline in sales of 34.6% was observed with Ireland showing relatively low sales of antimicrobial agents for veterinary use compared with high users such as Spain and Italy.

In Britain, meanwhile, research published by the Alliance to Save Our Antibiotics (ASOS) in April this year found that overall antibiotic use per livestock unit by beef farmers certified by the Soil Association was less than a third the national average, a finding that demonstrated how “much lower use” of antibiotics could still be achieved by switching to organic

methods of animal husbandry, according to Cóilín Nunan of the Alliance.

The future for beef

So what’s the future for beef? Along with all grocery categories, sales through retail channels have been boosted during the pandemic as consumer spend shifted from out of home venues. But the long-term picture for beef is uncertain. Competition for consumer spend is fierce, not just from white meats like poultry and pork, but from new plant-based alternatives whose variety, quality and price points are improving all the time. 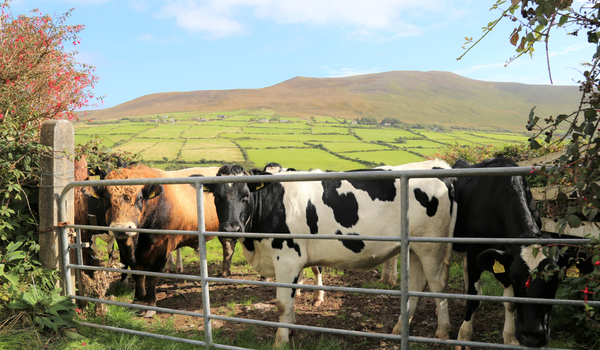 While 70% of people globally say they consume red meat weekly, or more often, reduced red meat consumption is evident in Western Europe with Bord Bia’s beef tracking research showing that European shoppers are buying “less but better quality beef” (18% in Ireland; 14% in the UK).  Significantly, in the 12 weeks up to 6 June 2020, there was a 109% year-on-year increase in sales of ambient meat substitutes, while sales of fresh meat substitutes were nearly 60% higher.

“It’s incredibly interesting to see that consumers are moving away from rigid interpretations of diets and specific lifestyles and are leading a global reset towards balanced diets and dietary inclusivity,” says Grace Binchy, consumer insights and trends specialist at Bord Bia. Binchy adds that health and sustainability are at the heart of the shift.

It’s hard to see burgers falling out of fashion any time soon, but the message from the data is clear: beef will need to compete on a number of fronts – including food safety – if it is to remain a popular choice with consumers.